What are those feathered freaks doing up there all day? Step into the brain of a bird with Jordan Resin's "Flappy Buds" and get in on some avian antics yourself. Their latest diversion is "Egg, Nest, Beak" (birdspeak for "Rock, Paper, Scissors"), only, those wings of yours weren't build for human hand gestures, so it might take some getting used to.

Use G, H, J, K, and L to bend and straighten each of your feathers (from left to right), and be sure to settle on Egg, Nest, or Beak before the time runs out on each round, or your bud will win by default.

Egg - Bend all of your feathers

Nest - Straighten all of your feathers

Beak - Bend all but the index(?) and middle feathers.

A tie will be dismissed with a sound effect from Paper Mario.

The concept is cute, and the experience of making five of your fingers actually represent you five fingers is quite a unique experience. However, it's kinda uncomfortable to control what seems to be your right hand (wing) with your right hand. The thumb gets controlled by your pinky and pinky gets controlled by your thumb if you naturally lay your finger on the keyboard, simply mirror the controls around would've made this much more enjoyable without what seems to me to be unnecessary challenge.

I didn't get how to play it at first, but after a few rounds I'm already skillful. I like the art and your ideas. The perspective you chose is so unique and because of that, the "Rock, Paper, Scissors" game became so fun. I also like "thumbs up to play again." As for critique, I would suggest that adding some introduction at the beginning and that could make players easier to understand the mechanics. Overall, this is really cool! Great job!

Hello Jore-dan, this game is hecking cute, simple, and intriguing! I like the concept, art, and how you control the pigeon's hand(feathers? wing??)  I simply cannot beat my pigeon companion, they are simply too good at this game. The game is fun and simple. As someone who uses WASD for all games, it was a little challenging to use the control scheme given, I would suggest a scheme like Q,W,E,R, and Space -- but that's just me and my wacky idea. Great job overall, please make a comic about pigeons!

I think the premise is super entertaining and cute. Controlling each finger to play rock paper scissors is really cool, and I love the fact that you decided to use PIGEONS to make a game like this.

Another nit-picky critique would be that the opponent pigeon uses their first two fingers to do scissors. However, for the player, they must use their second and third fingers to do scissors. It confused me a bit in the beginning because I tried using scissors with my thumb and index finger too, only to realize that wasn't the correct way of doing things. I think either changing the art for the opponent or making the index finger + thumb a viable scissors combo would be useful!

I can't really say much else though because this game has so much charm to it! I also love the fact that you need to do a thumbs up to replay--very clever! Loved this game a lot :)

Really like the idea of controlling five fingers. It got me thinking about how much we can communicate and do with just fand gestures. I wish the game features more tactic play though. Figuring out and getting used to the control was fresh and fun, but then it becomes a RPS game. Using hand gestures to communicate is a very interesting idea, I really like you restart the game by giving a thumb, I experimented with other gestures, even gave my feathered freind a middle finger when I lost a round :> There is so much potential in this idea, and this game is inspiring and very interesting. Also love the art, as usual, love the shaking of the text.

Hi Jordan! The art looks really cool! I like the idea of birds playing rock paper scissors with their feathers.  The paper mario's sound effect sounds great in your game. I do wish there is a timer count down sound effect for the counting down at first, but once I got familiar with the control I didn't worried about the counting down anymore. I would also like to see more instructions in the beginning. Now the instructions are given in the description, may be try to move them into the game and let that pigeon to "introduce" them for you. Great work overall!

Hey Jordan! Great job! The art is great as always, and I LOVE the hand written words that have a little bounce to em.  Sound effects are great, love the new uses for the classics.

My only slight piece of feedback is that I wish the opponent had a few different playstyles, and the game became more a game of strategy and figuring out the controls rather than luck. RPS generally seems like a luck based game, but there are predominant behaviors that emerge between players, so I think it would be nice to emulate those.

Regardless, the game is still very fun and has all of that good game juice. :)

You art is cute l love it! And this is a really interesting version of rock paper scissors. But I would say that adding some background music would be more amusing during the gameplay, maybe street noise or a lively tune, whatever kind of music. And besides this, it is a little bit hard to figure out the time limit here since it is represented by words, and therefore it makes me confused about when is the final time I can still change my decision. Maybe a graphic indicator would do the work. Great game overall! 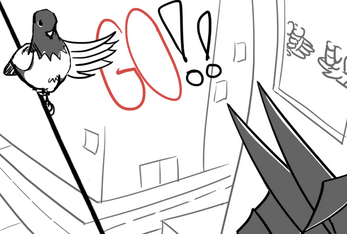